The Orca, the Chimera, and the POS

Yesterday, some of us logged in to run anomalies, but we couldn't field enough people. Denied the opportunity to shoot NPCs, we went looking elsewhere for things to shoot.

I jumped into lowsec, into a C3, and into a C4: J140810. There, I find a territorial control unit, a mobile warp disruptor, and a POS. Inside the POS is an unmanned Chimera and a manned Machariel. Deciding this could be delicious, we ship up into mostly stealth bombers and fly to the lowsec.

With the Machariel still just sitting in a POS, we find a Retriever in a belt. As we carefully slowboat our stealth bombers into point range, belt rats spawn and the Retriever warps off. We find it at another belt and gank the living bejeezus out of it.

The Machariel in the C4 signs off but is replaced by a Proteus in another POS. It warps to the C3, and we set up on the lowsec side to gank it. As it leaves the C3, we screw up big time. Our heavy tackle had a warp scrambler and, unfortunately, was more than 10km from the Proteus. Our stealth bomber had accidentally drifted very far off the hole and was more than 24km away. Our other guys were not in position or were on the C3 side to catch it when it tried to hop back.

We decide to hop into the C3 so we don't appear in local in the lowsec. Our entire fleet is cloaky so it appears that we've left entirely.

Some minutes later, Ceremone comes back in a Velator. We're tempted to grab it, but we decide to let it go in hopes of catching something bigger. The Velator lands in the C4 POS and switches into a T2 transport ship. He warps to the C3 wormhole and I excitedly call this out over comms. At this point, it's been about 20 minutes since we missed the Proteus; we are getting antsy and are looking forward to looting the wreck of this transport.

Someone points out that he's moving out of the C4 and is just testing to see if we're still here. We let it go unharmed through the C3, into lowsec, and away.

One of us mentions that he left a character logged out in a C1 overnight with a very vulnerable small POS and a couple of unmanned ships sitting outside the SMA. It's a mere 9 jumps from the lowsec...

The Orca, for real this time

15 minutes later, Ceremone shows back up in an Orca. He enters the C3, warps to the C4, jumps into the C4, and is locked down by most of our fleet. With his armor gone, he jumps back into the C3, where the rest of us lock him up, blow up the Orca, and pod him.

Ceremone > oh my corp
Ceremone > has been nothing but lazy bitches lately. i was moving my shit out on the DL to quit em
Kratorin > wait
Kratorin > if ur quitiing them can we get pw to shields?
Ceremone > nah, im not like that
Kratorin > aww

On an unrelated note, he told us about his corp's appearance on /r/Eve.

Ceremone > youre dead set on trying to get me vengeful
Kratorin > trying to make us both some isk
Kratorin > and have some fun with a carrier
Ceremone > wont happen brother, my ex wife was satan
Kratorin > umm
Ceremone > i got no control over those tho
Kratorin > your ex wife or satan?
Ceremone > either
raylu C > from what i just gathered, they're actually the same person
Ceremone > that they were

We head to the POS in the C1 in stealth bombers. It has a web and some small lasers online. The lasers aren't able to track our frigates, but with the web it can. Our plan is to shoot it, cloak up, shoot it, cloak up, until it dies or we die of boredom. 50% through the web's shields, one of us decides to try staying decloaked to see what happens.

Nothing. The POS isn't configured to shoot back. Neither the web nor the lasers lock us. We switch targets to the POS and just unload on that. Since the system is 3 jumps from Dodixie and the tower is an unhardened Amarr tower, we ship up into some Oracles and start working on it.

Our fingers are crossed for an unstronted tower. We get its shields down to 45%. I mean, who doesn't even set their guns to shoot back? Shields are at 35%. Surely if they weren't competent enough to set up the guns, they also didn't stront it, right? 25%. As we get through the 25th percent, the tower enters reinforced. Much groaning is heard over comms.

Too disappointed to set up mobile warp disruptors, I log off. One of our newbros dies in the C1. I log back in as we get their scanner.

I proceed to failcage the POS. 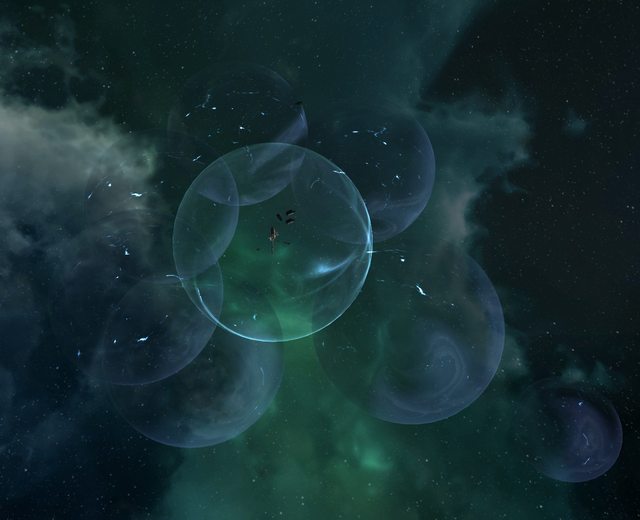 A failcage is like the much more popular other cage, but with an extra dose of fail. In my defense, this was my first time setting up bubbles on a POS. Math is hard. Bestowers are slow.

A Hurricane slips into highsec while the bubbles are onlining. We log off for the night.

The CEO freaked out when he found out Ceremone was leaving and ejected all of the ships out of the mining POS, moving everyone into the large one. With the Chimera.

After the CEO signed off, good guy Ceremone gave James Arget the forcefield password and invited him to self-destruct the Chimera. (For reference, carriers do not fit through C4 wormholes.) I'm sad we weren't on that kill, but I'm glad Ceremone has moved on.

That night, we show up as the tower is exiting reinforced. Overnight, they had destroyed my failcage and gotten their ships out. 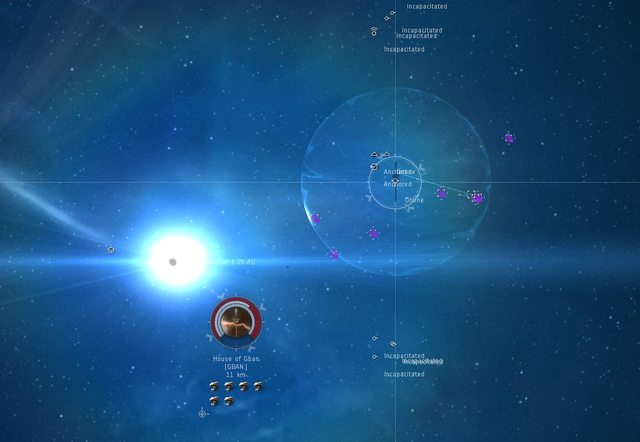 We blow up their POS.